Reopening of the School 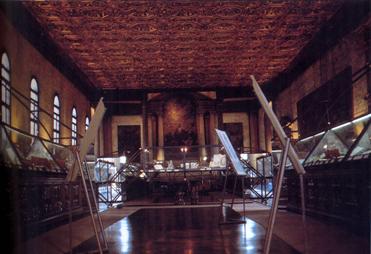 The Scuola Grande di San Marco, founded as the Scuola dei Battuti in 1260, with a small meeting room near where the Santa Croce church once stood, had become so influential and wealthy by 1437 as to assume the name of the patron saint of the city and to bring about, adjacent to the Dominican convent of Saints John and Paul, the most imposing of the Venetian schools. The construction and works that embellished it were reduced to ashes on 31st March 1485. Someone had left lit candles on the altar of the Sala Capitolare, with a breeze blowing a curtain that caught fire and left all of the school in flames that burned all night long. 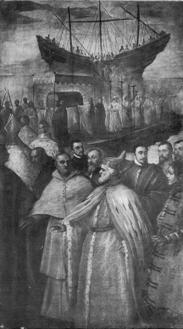 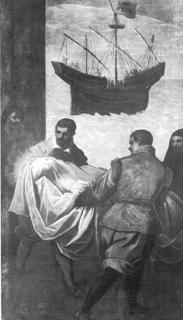 The reconstruction began immediately with a never-before-seen grandiosity. Pietro Lombardo was hired as architect whilst Gentile and Giovanni Bellini were asked to collaborate on the sculptural adornment of the façade. Construction was briefly interrupted in 1490, when Lombardo was replaced by Mauro Codussi and Antonio Rizzo. In addition to the splendid monumental portal which, amongst other things, preserves anonymous works of graffiti on its sides, with two significant sculptures from the old façade saved from the fire: "Saint Mark Venerated by Members of the Confraternity" by Bartolomeo Bon and the "Charity" attributed to Nicolò di Pietro Lamberti.

Inserted in the reconstructed façade as new works, we can now identify the eloquent high-reliefs of Tullio Lombardo, son of Pietro, representing the “Healing of Anianus” and “The Conversion of Anianus”. The lions that flank the main portal are a reproduction of the original ones destroyed upon the fall of the Republic in 1797. The entrance Hall is adorned with a "processional series" of ten high pedestals, surmounted by columns, imbuing the hall a formal solemnity and enriched by the two portals of the staircase that leads to the upper Sala del Capitolo, the work of Coducci from 1495. From the outset, the confreres of the Scuola decided to limit the reconstitution of the series of the paintings, excluding vast spaces within the Sala Capitolare, to dedicate all resources to the smaller walls of the Sala dell'Albergo with a series of six canvases dedicated to happenings in the life of Saint Mark. The Hall became one of the most spectacular complexes of the Venetian Renaissance, attracting European scholars and experts, thanks to the works of Gentile Bellini ("The Preaching of Saint Mark"), Giovanni Bellini ("The Martyrdom of Saint Mark"), Giovanni Mansueti ("The Healing of Anianus" and "The Baptism of Anianus"), Paris Bordone ("The Fisherman Presenting the Ring to Doge Gradenigo"), and Jacopo Palma il Vecchio ("The Saints Mark, George and Nicola Save Venice from the Storm"). 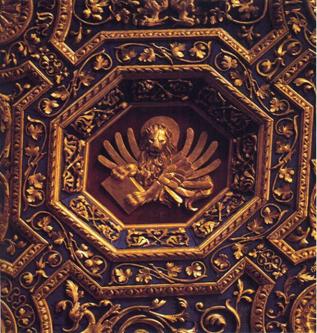 In 1495, Pietro and Biagio di Faenza were entrusted with the task of completing the breath-taking carved and gilded ceiling of the Sala Capitolare and the Sala dell'Albergo, which can still be admired today as Venetian marvels.
Following the fall of the Republic in 1797, Napoleonic looting and Austrian domination struck a blow to the integrity of the pictorial series realised in the Scuola following its reconstruction.
Today, the Scuola is rather embellished by a painting by Palma il Giovane, "Christ in Glory with Saints Mark, Peter and Paul", created in 1614 as the altarpiece of the Sala Capitolare, where it can still be found to this day; by four paintings depicting scenes from the legend of Saint Mark created by Domenico Tintoretto; by two enormous wall paintings on the right wall of the Sala Capitolare, the "Crucifixion" by Alvise Donato and "The Marriage at Cana" by Padovanino.
The origins of the library - the Biblioteca Medica - within the  Sala Capitolare and in the hall of the Albergo della Scuola Grande di San Marco are quite historic, deriving from the Library annexed to the Dominican convent of the Church of Saints John and Paul, which can be traced back to the 14th century. The restoration of the library occurred in the 16th century, along with the restructuring of the monumental staircase leading thereto, overseen by Baldassarre Longhena. By 1948, following the conferral of important book resources throughout the centuries, the library's patrimony had grown to such an extent that it had to be relocated in the larger rooms of the Scuola Grande di San Marco, designated as a medical library. At this point, the published resources of the library reached over 8,000 volumes on medicine. The foundation of the five components of this Library consist in a manuscript (composed by the text of the Rule of Saint Benedict for the female order), and two incunabula, two hundred and sixty-seven from the 16th century and two from the 17th century. Amongst the volumes are those of the writings of Hippocrates, Galen (with a good fifty-two specimens) Pliny, Girolamo Fracastoro - the father of modern pathology, Falloppio, Avicenna's Canon, the Orlando Furioso by Ludovico Ariosto, a work by Marsilio Ficino, the Dictionarium Medicum of Estienne, the writings on surgery by Iacopo Berengario, Jean Tagault, and Variarum Lectionum of Mercuriale.